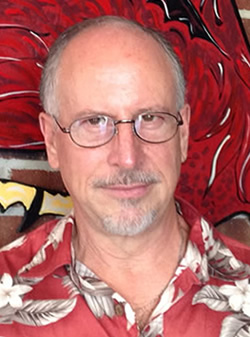 John Miranda graduated in 1976 from the University of South Carolina with a B.A. in Art Studio. Studies included: Photography, Filmmaking, Sculpture, and Acrylic/Oil painting.

After college, John found employment in advertising design, logo illustration, and musical performance. (John has been a saxophonist/flutist with various bands since the early 1970’s, and is currently performing with the party-beach band SECOND NATURE.)

In December of 1979, Mr. Miranda started MIRANDA PORTRAITS. From 1980 to 1990, he painted pastel portraits for military personnel at Fort Jackson, Shaw Air Force Base, Myrtle Beach AFB, and Charleston AFB Exchanges. It was there that John developed an appreciation for realistic detail and color.

Mr. Miranda left the Exchanges in 1991 to paint portraits at two Columbia, S.C. galleries: The Erica Hoyt Gallery at Dutch Square Mall and the Rita Smith Gallery at Richland Mall. While at these galleries, John opened his own gallery in First Points (also located in Columbia) around September of 1999. In 2001, he closed this gallery and became part owner of Masterpiece Art in Lexington, SC until 2004. Later in 2004, Mr. Miranda took over the Erica Hoyt Gallery and renamed it John Miranda’s South Carolina Artists. After a successful run, in August of 2013, John decided to close this gallery and pursue more independent artistic endeavors such as this website. Mr. Miranda believes operating a gallery is an exciting and rewarding experience that every artist, if given the chance, should try.

John Miranda is currently showing his artwork at Rita Smith Gallery at Richland Mall and Village Artists in the Village of Sandhills. Both are in Columbia, SC. John has more than a dozen pieces of art in print, with more than half limited edition prints. He believes in signing all of his work. John feels the artist’s signature gives a print that special touch.

Mr. Miranda has a fond love for pastel. Colors blend at his touch to combine with a fine line to create a realistic rendering of even the most difficult subjects. He has the instinctive ability to capture both likeness and form with a softness that is entertaining. John plans, with the grace of God, to serve as a portrait artist for the rest of his life.

Chalk Pastel is a dry color-fast medium utilizing the same pigments that are in oils, acrylics, and watercolors. It is sold in stick and pencil form and, after applied, should be sealed behind glass.
The portrait is painted with chalk pastels onto suede mat board and, when finished, is placed between two pieces of foam board (This will keep the portrait secure for shipping). No spray fixative is needed nor advised for this product. After receiving the portrait, just take it to your favorite framer. Any questions? Just contact me.

Whether realistic or impressionistic, a great portrait captures not only the likeness of the subject but also the personality and character.

After studying the subject, I use soft pastels to apply an oval base that closely matches the face. to draw the face, I start from the inside out. Being right-handed, I sketch the left eye first, then move down the nose and up to the right eye. Next, I draw the lips and the chin. I connect the left side, then the right side of the face to the chin. I add the hair and ears, then finish with the neck and collar.

Now I'm ready to add pastels. Working from dark to light shades, I build color and structure. I pay special attention to lighting on the subject. (Lighting turns a flat circle into a ball.) I paint what I see, not what I think I see.

For facial details, especially the eyes, I use hard pastels and a charcoal pencil.

Next, I concentrate on the attire, sometimes spending more time on it than the face. If the outfit is important to the character, it deserves close attention.

When finished, I put the piece aside for at least a week. Then I make final adjustments, if needed.